Preventive conservation is the improvement of storage conditions of art objects in order to avoid the necessity of restoration.
The storage/environmental conditions consist of all the factors around or surrounding the art object or collection. These elements should not be allowed to influence an art object or collection in a negative way.
The consequences should never be underestimated. A great deal of the damages shown on our website are the result of conditions as mentioned above.
Circumstances of storage have been widely investigated in order to reach an idea of ideal conditions of storage. It's a field of knowledge in development, with the realisation of new equipment and techniques, the increasing knowledge of materials used in art and the sharing of practical experiences. The knowledge we have of conditions of storage is increasing every year.

Natural aging of objects can never be stopped, only slowed down.


Practice:
It is through our experience with many institutions and private collections that we know that ideal storage conditions can rarely be reached. It is possible though to make improvements after having analysed the situation.

We can offer advice on preventive conservation as to the use of equipment for air conditioning, lighting, integrated pest management, measuring light and climatological circumstances, regenerating and calibrating of measuring equipment and we reframe paintings in such a way that they are better protected. 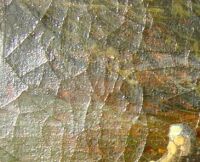 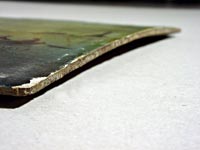 Warped panel
Explanation of problems with the layers of primer, paint and varnish, mainly caused by humidity Influences of temperature:
scorching of the paint (e.g. by a lamp), damage caused by a relatively low level of atmospheric humidity (e.g. because of central heating), damage caused by candles burning near to the painting
Bad framing:
fracture in the hanging system, damage to the edges of the framework, dents by dirt between frame and linen, growth of fungus and damage by dirt, breaking of a panel by too tight framework
Dust and dirt:
they cause growth of fungus and oxidation (dust attracts humidity), damage by soot (from candles) and deposit of nicotine, splashes of dirt like candle-grease, wine, masonry paint, plant spray, dents caused by dirt between frame and linen Stains (damage by use of plant sprayer) 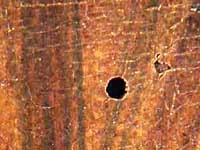 Damage by woodworm from stretcher onto linen Fungus:
damage at the front and back of the painting - damage by weather-stains 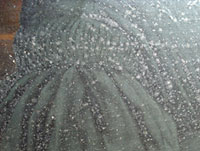 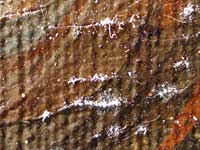 Growth of fungus on insect excrements Growth of fungus at the back of linen and stretcher 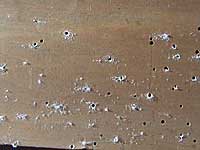 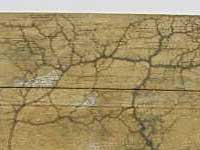 Growth of mycelium on the back of frame 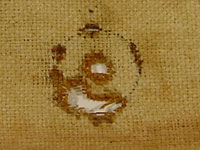 Accomodation:
damage caused by shortage of space, damage because of acids or oxidation in racks or shelves, damp and water from leakages

Damage from leakage of a waterboiler

Outer parts of the building:
draught, large changes in temperature and degree of humidity, bad isolation, damage by roof leakages or overflowing drainpipes, entering of dust and insects Melting of plastic foil into varnish

Numbers chalked by auctioneers
(on back)

Dents by chalked numbers
(on front)

Loss of paint caused by mopping of the floor 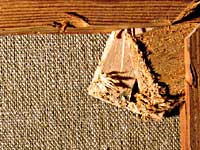 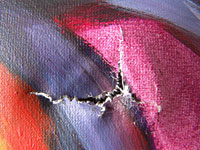 Damage to varnish and paint, caused by fire 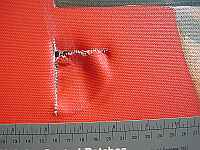 Damage caused by fall of a defect ladder

All examples mentioned above belong to the damages that occur most often, as we have assessed, but doubtlessly there will be many more. Handling objects of art e.g. transport, storage, exposition) can cause much damage, but damage can also occur when nothing is done. Apart from preservation and restoration of art objects it is of the utmost importance to see to it that they are properly stored where environmental factors can not cause damage in such a way that they have to be treated anew.
Conservation studio
Tingietersweg 87
2031 ER Haarlem